I love the Orzo and Spinach Salad that Whole Foods makes and thought about replicating it at home.  A quick search on the internet brought me to one that sounded promising, and I made a few modifications.  This salad can be served cold or at room temperature and would be great to bring to your next BBQ.

I’ve made this recipe a few times and it’s always a hit (even with the kids)!  If you love artichokes (um, yeah!) and olives (yeah!), and you’re looking for something new to do with chicken (please!), then try this meal.  I serve it with crusty bread (rustic sourdough loaf) which is great for soaking up any excess liquid.  I hope you love this! 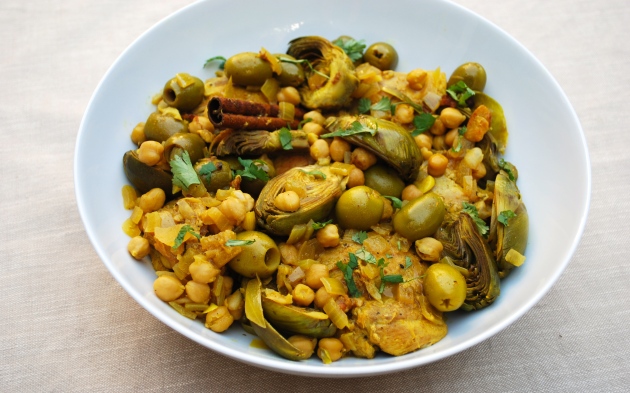 Pat the chicken dry and season salt and pepper. Heat the olive oil in a Dutch oven or heavy soup pot over medium-high heat. Add the chicken, working in batches if necessary, and cook until well browned on each side, about 3-4 minutes per side. Transfer to a plate.

Decrease the heat to medium. Add the onion and a pinch of salt and sauté until soft and slightly golden, about 5 minutes. Add the garlic and sauté for 1 minute. Add the turmeric, cumin, coriander, red pepper flakes, cinnamon stick, and bay leaf and cook, stirring constantly, until fragrant, about 1 minute. Pour in 1/4 cup of the broth to deglaze the pot, stirring to loosen any bits stuck to the pot. Stir in a pinch of salt and cook until the liquid is reduced by half. Stir in the remaining 1 3/4 cups of broth, the lemon zest, and 2 tablespoons of the lemon juice. Decrease the heat to medium-low, add back the chicken thighs, and cover and simmer for 15 minutes.

Add the chickpeas, artichoke hearts, and olives and stir gently to combine. Increase the heat to medium-high and simmer uncovered, stirring occasionally, until the chicken is heated through, about 5 minutes. Check largest chicken thigh with a digital thermometer to make sure it is cooked through to at least 170 degrees in the center.  Stir in the remaining tablespoon of lemon juice. Taste; you will likely want to add another squeeze of lemon juice and a pinch of salt. Garnish with the mint or cilantro.

This is a wonderful and interesting dish – a great option for a vegetarian night.  There are so many tastes (and textures) going on: salty feta and olives , sour dried cranberries, bitter kale, sweet red onion, and aromatic garlic.  I could eat this once every two weeks — and I don’t know why I don’t!  It’s great with linguine, but also great with healthier penne (we often use Barilla Plus or Barilla Whole Grain). In this photo I tried a brown rice penne from Trader Joe’s which was also good.  Two notes: 1) whole wheat pastas don’t reheat that well (so chewy!) just in case you plan to make enough to have leftovers and 2) I thought 5-6 cloves of garlic was plenty (recipe calls for an entire head).

Recipe from the blog Two Peas and Their Pod.

This pasta dish is also known as “crazy spaghetti” because it is crazy good-a family favorite!

1. Heat olive oil in a heavy skillet over medium heat until it shimmers, then cook garlic, stirring, until golden, about 3 minutes. Transfer garlic with a slotted spoon to paper towels to drain. Cook onion in the remaining oil over medium heat, stirring occasionally, until softened, 3 to 5 minutes. Add dried cranberries and cook until plumped, about 1 minute.

2. Add kale leaves into onion mixture with water and 3/4 teaspoon each of salt and pepper. Cook, covered, over medium-high heat until almost tender, about 5 minutes.